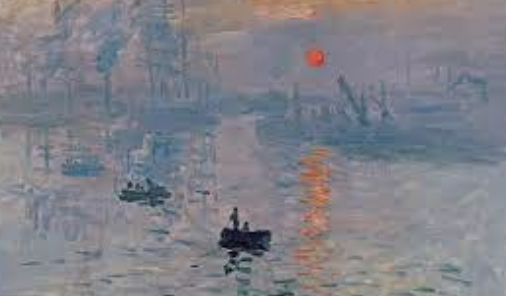 Go outside, lay on the ground and watch the clouds float by. Or stand on the beach and watch as the waves ebb in and out and watch the sands changing. Impressionism is like this. It isn't something detailed but rather more vague or blurred. There is an air of mystery, magic and wonder that surrounds Impressionistic music.

The painting is by Claude Monet, Sunrise. We are seeing a shoreline from a distance, blurry. We can feel the coolness of morning and maybe the story of those out on the water can unfold, just like the sun unfolds anew day. Art and music shared this Impressionism time period. It came out of the French area of Europe. It began around 1870 and ended after 1910. This time period is also shared with the Romantic and the 20th century time periods, overlapping them.

When we take clay and press a coin into it we can see the outline of the coin in the clay or its impression. This is where the word for the Impressionism period comes from. When we go to a party and feel the joy and fun in the room we might say the room has a fun atmosphere. The music and art of this time wanted to impress in our minds a picture or feeling or the atmosphere of the mood.

During this time composers would also use instruments in different ways such as the flute and clarinet playing low darker sounds or the horns being muted with a mute or a hand. Composers did not compose songs with an even rhythm. The rhythm changes although there is a written rhythmic style to follow.

We will look at the two most prominent composers of this time, Claude Debussy and Marice Ravel.

To finish off our Baroque time period, have fun watching an old Disney cartoon to Vivaldi's "The Four Seasons"

So much has been written about Bach. His music and his life is well known. He was born in what is now Germany during a time when many princes ruled over the area. He worked for a few of the Princes and made a living writing music for their courts and for the church as well as playing the organ and teaching.

Click here for a more detailed history to read on J.S. Bach

Here is a video for kids on the life of J.S. Bach

Prelude in C Major BVW 846 from The Well Tempered Clavier

Most students will recognize the Prelude in C Major. Many students also get to play this piece! This recording is played by Lang Lang, a very well known pianist today throughout the world. Lang Lang began playing piano when he was three and began his full-time professional music career at age 17. This recording has an interesting twist. Lang Lang wants to share classical music and make it more interesting with everyone. Watch this to see one way he does it.

In the Book The Well Tempered Clavier, Bach wrote a Prelude and a Fugue that went together. This is the fugue. Fugues are more difficult, they have three or four parts that play. Watch this version of the fugue and see the four colors they use to show each of the parts. Each color comes in playing the main theme, can you hear it?

Here are two of the four movements of the Bach Flute Sonata. When Bach was alive, they did not have a piano yet, only a harpsichord. The flute was also made of wood. These two recordings are made from instruments they would have played during Bach's time. The first is just harpsichord and flute, but the second video you will notice more instruments. These sonatas for flute may have been performed with just a harpsichord, or could have been performed with other instruments. Bach wrote a flute solo and for Continuo - which was an accompaniment like the one on the right with a line of music and numbers under. The Continuo part was to play the harmony and improv based on the numbers, called figured bass.

I hope you enjoy this month's listening!