At some weddings the famous Pachelbel's Cannon is played as the bride walks down the aisle. This piece has been played and arranged in many ways for 300 years! A couple of students in the studio are learning this famous piece on piano this fall.

Johann Pachelbel was born in Numberg Germany. His father enrolled him in the St. Lorenz High School but soon recognized Johann's musical potential and arranged for outside musical training. In addition to his academic and musical studies, he served as organist at the Pfarrkirche. During his high school years at Gymnasium Poeticum in Regensburg, Johann was given permission to study music outside the Gymnasium with Kaspar Prentz. It is believed that this teacher helped to develop Pachelbel's interest in Italian and church music.

In 1677, he returned to Germany and settled in Eisenach where he worked as the court organist for Prince Johann Georg of Sachsen-Eisenach. During this time he became known as not only an important German organist but also a composer. Pachelbel also became friends with the Bach family and began to tutor Johann Christoph Bach.

Johann Pachelbel wrote many sacred and secular works during his lifetime as a composer, organist and teacher. He is best remembered for his Canon in D and is through his work has become an important Baroque composer.

There is not many videos made on Pachelbel's life, here is a short 1 minute video.

And... The Famous Cannon in D

Played with original instruments - Look at the Big Lute in the middle of the group.

Played as a Flash Mob by a kids orchestra:

This semester we will touch on Japanese Music. Today we will get a short introduction to the instruments they used. The videos that I have included are maybe a little long for younger students, just listening to the first minute or so will generally give them an idea of the instrument.

Drums have played an important role in Japanese music. They were used in battle to intimidate the enemy or to give commands to the army. Huge drums playing may scare the enemy away! Taiko were also used in religious ceremonies played by holy men. Today Taiko drum groups can be found throughout Japan and even the world. There is even a video game called Taiko Drum Master!

This instrument is played with a large wooden strummer and has strings like a guitar. The strings are strummed or plucked or even slid along. Many times it was used by singers to accompany stories. Just like we have different types of stringed instruments, they also had different types of Biwa. Some had four strings and others 5 and the strings may be tuned to different notes.

But the instrument that looks even more like a guitar or a banjo is the Japanese shamisen. It only has three strings and has a very long neck. This instrument has been used with many

And of course my favorite instrument, the flute-like Shakuhachi. This is made out of bamboo and is held like a recorder, but the player blows across the top like a flute.

How would you like to play the piano by plucking the strings yourself? These are the type of instruments that inspired very early keyboard instruments. The smaller Dulcimer is similar to the Japanese Zoto. This Zoto has 25 strings.

Heading Back to Baroque

Heading Back to Baroque

When Music was Fancy 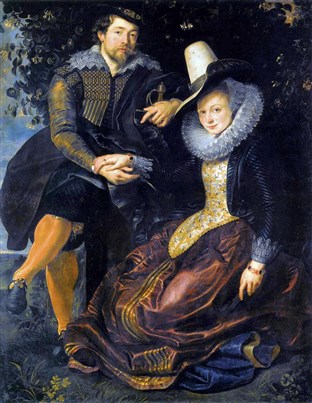 We will be listening to music of composers of the Baroque time period, from 1600-1750. This was before the United States was a nation, but during the time people were exploring and colonizing these new America's. Think of a fancy dress. What makes it fancy? Under all the embellishments added like fancy lace, or big collars, or other added sewing the dress would be plain. But, by adding embellishments it makes it fancy. [The picture is from the 1600's the painter Peter Paul Ruebens painted a portrait of himself and his first wife Isabella.]

Just like fancy clothes we can make music fancy by adding embellishments called ornamentation. Many of you have played a trill, or a mordent or a turn. These ornaments simply add more notes to the melody line to make it fancy.

This is a great short overview of the Baroque Period. Can you find some of the different instruments: The Lute looks like a very large guitar. Watch how the harpsichord plays. Can you name a composer from the Baroque time period?

Next Month we will learn about the composer Pachabel from the Baroque time period. Remember to get your Baroque Booklet to become a Baroque Superstar this semester and earn a medal.